Wuthering Heights was written by Emily Brontë and was first published in 1847 under the pseudonym Ellis Bell. Interestingly Emily Bronte is the sister of Charlotte Bronté, the author of Jane Eyre.

Wuthering Heights introduces the reader to themes of love and revenge and how they can destroy lives (download a free copy of the Wuthering Heights PDF by clicking the button down below). The story is set in the Yorkshire moors and centers around the estate of Wuthering Heights and two families, the Earnshaws and the Lintons.

The book’s main character, Heathcliff, is a dark and brooding figure, who is consumed by his love for the beautiful Catherine Earnshaw. One day Heathcliff overhears part of a conversation between Catherine and their maid Nelly and believing that Catherine has rejected his love, he leaves Wuthering Heights and goes into self-imposed exile. Heathcliff returns years later, a wealthy man, and sets out to destroy the lives of those who have wronged him.

You can download your free copy of the Wuthering Heights PDF by clicking the button below. Depending on what device you are using, the PDF book will either open in a new tab or download to your device.

If you would like to download a copy of the Wuthering Heights book to your device, you can right-click the button and choose “Save As…”.

Yes, it is! Emily Brontë wrote Wuthering Heights in 1847 so it is in the public domain. You are therefore welcome to download the PDF and read it for free. We hope you enjoy it!

Wuthering Heights takes place in 1801 in Yorkshire. The story begins when the new tenant of Thrushcross Grange, Mr. Lockwood, visits his landlord, Heathcliff, at his secluded moorland manor called Wuthering Heights, which is four miles away.

On his arrival, he meets Cathy Linton, a shy and reserved young woman, and a young man by the name of Hareton who seem to be an uneducated servant. Even though everyone is gloomy and unwelcoming, Mr. Lockwood agrees to stay the night when he is caught in a storm and snowed in.

He is offered a room for the night and there he finds a diary that was written by Catherine Earnshaw. That night he has a nightmare where he sees Catherine’s ghost begging him to let her come in through the window. Lockwood is terrified and he yells out waking Heathcliff who is worried about what has happened.

When the storm subsides, Lockwood decides to go home to Thrushcross Grange even though there is still heavy snow. He ends up falling ill and has to stay in bed to recover. While recovering, his housekeeper, Nelly tells him the story about Heathcliff and the family that live at Wuthering heights.

Her story begins thirty years earlier. Mr. and Mrs. Earnshaw live at Wuthering Heights with their two children. One day Mr. Earnshaw returns from a trip to Liverpool bringing an orphan boy named Heathcliff with him. Mr. Earnshaw’s children, Hindley and Catherine aren’t fond of Heathcliff at all. However, Catherine and Heathcliff soon become very close and they spend all their time together.

Mr. Earnshaw dies three years later and Hindley inherits Wuthering Heights. He has married a woman by the name of Frances and they decide to allow Heathcliff to stay on but only as a servant.

One day Catherine and Heathcliff decide to spy on their neighbor’s children, Edgar and Isabella Linton, who live at Thurshcross Grange. When their dog attacks Catherine, she is forced to stay with them for five weeks to recover but they send Heathcliff back to Wuthering Heights.

In her time away, Mrs. Linton teaches Catherine how to behave like a proper young lady. By this time Catherine has also developed feelings for Edgar making her relationship with Heathcliff a lot more complicated.

When the Lintons bring Catherine home, Edgar and Hindley mock Heathcliff, and Heathcliff vows to take revenge on them after they lock him in the attic.

Soon after that, Frances dies in childbirth. Her son, Hareton however survives. Hindley is devastated, and he begins to drink heavily. He also becomes more abusive towards Heathcliff.

After a couple of years, Edgar proposes to Catherine and she accepts, wanting to maintain her social status. However, one day while speaking to Nelly, she confesses that she loves Heathcliff but can’t marry him. Heathcliff hears the two women talking but only overhears part of the conversation.

He leaves Wuthering Heights believing that Catherine has no love for him. After he leaves, Catherine is distressed and she falls ill.

Three years later, Catherine eventually marries Edgar and Heathcliff returns shortly after their wedding. During his time away, he has managed to become very wealthy. Edgar’s sister, Isabella falls in love with him and he doesn’t discourage her.

Edgar becomes angry that Heathcliff is always at Thruschcross Grange so he cuts off contact with him. Catherine is very upset and she ends up locking herself in her room, refusing even to eat. By this time, however, she is pregnant with Edgar’s baby. One day, Heathcliff decides to elope with Isabella but the relationship doesn’t go well and they soon return.

In the meantime, Catherine’s health has continued to deteriorate. Heathcliff visits her in secret but she dies soon after giving birth to Cathy, Edgar’s daughter. Cathy becomes a constant reminder of Catherine to Heathcliff. Isabella has also fallen pregnant and she gives birth to Linton, Heathcliff’s son. Six months later Hindley dies leaving everything including Wuthering Heights to Heathcliff.

After thirteen years, we learn that Isabella is also dying and she sends Linton to live with Edgar. However, Heathcliff insists that Linton lives with him instead. Linton is sickly and Heathcliff treats him badly.

Over time Cathy and Linton begin to develop a relationship. When Edgar dies, Heathcliff wants the two to get married but insists that they live in Wuthering Heights. His behavior starts to become more and more erratic and one day he confesses that on the night that Catherine died he dug up her grave in his grief. Since that night he is convinced that she is haunting him. When Linton dies, Cathy has to remain at wuthering heights and she is also treated like a servant, just as Heathcliff had been.

When Nelly ends her story, Lockwood is horrified by what has happened and he moves away as soon as he recovers. He returns eight months later while traveling in the area. When he visits Wuthering Heights he sees Nelly again. Nelly tells him that Cathy is teaching Hareton to read.

After his death, Cathy and Hareton decide to get married and live at Thrushcross Grange and another servant is left to take care of Wuthering Heights. The story ends with Lockwood visiting the graves of Catherine and Heathcliff and he is convinced that they are finally at peace.

Need to know who’s who in Wuthering heights? No problem, here is a family tree to help you out!

There are quite a few Wuthering Heights adaptations. According to ScreenRant, these are the best!

Wuthering Heights is a timeless classic written by Emily Bronté. It is a story of love, betrayal and revenge and even though Heathcliff and Catherine don’t find each other in life, maybe they were reunited in death. Download a free copy of the Wuthering Heights PDF here. 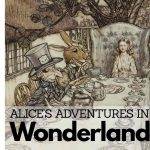